Effects of Ruble devaluation towards ETF

The Russian Central Bank has intentionally lowered its currency with the aim of decreasing further the inflation level in the country. The decrease is intended to proceed for the next half year. Currently, the spot price value of USD/RUB is approximately 57 rubles per dollar. This change is observed by several forex analysts to be quite small as noted in the diagram below.

The Russian economy can be observed to be steadily regaining its stability following a two-year recession. It has shown a steady appreciation since 2016 February. One major contributor to this increase can be likened to the increase in oil prices. This impact, however, does not fully enable the country to recover from its growing financial obligation. The government’s debt is equivalent to the Russia’s Gross Domestic Product of 17.7%. This value has been constant since the year 2004. The reason is mainly from the fact that Russia largely depends on its natural resources such as oil.

Even though the current interests’ rates of the country stand at 9.75%, it has helped in stabilizing inflation while at the same time preventing the economic growth.  The Russian government has plans underway even further to decrease inflation level to less than 4% yearly.  The next general meeting of the central bank is scheduled to take place on June 2017. It is likely that the rates will subside even further down.

Russia has benefited immensely from its trading with the US in what is called carry-trading due to the widespread experienced between the two countries in the interest rates.  This trading experience can be illustrated vehemently using the diagram below; 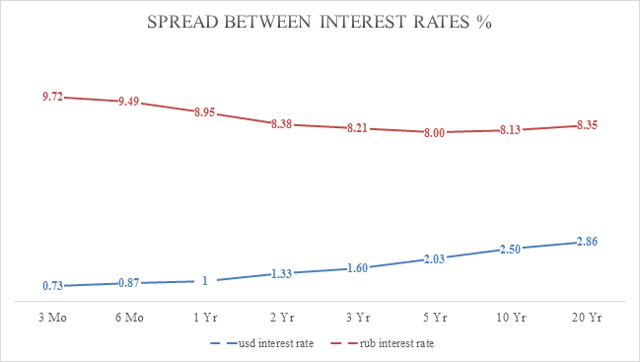 As observed, the rapid increase of rubble in the year 2016 has been as a result of the investment schemes. However, it can be predicted that when the spread of the interest rates starts to decline, there will be a huge efflux of cash from Russia. This outflow will be as a result of the massive amount of money that the Russia invests in from its reliance on its assets. Due to this contributing factor and other related reasons, the value of the Russian currency will devalue eventually.

The Central Bank of Russia through its Chairman Elvira Nabiullina has expressed its intention of maintaining the tight monetary policy. This decision, therefore, implies that there will be some adjustments in the interest rates so as to accommodate with the inflation dynamics. This adjustment is a clear implication of the devaluation of the ruble. As seen below, the steady 4.6% inflation rate has been a constant. However, changes are being made to decrease to 4% by the end of the current year 2017.