FB: The only Real Facebook Metric needed to be watched

Facebook, a social media platform that unites people on different backgrounds as one has become one of the most popular social media in the world. Due to its growing popularity, FB is likely to exceed its target limit of 2 billion monthly average marks ahead of the year 2017. A rough estimate of 1.86 million users was recorded in the previous year 2016.  This jump was a remarkable growth of 17% growth consistently year after year.

Despite the tremendous increase of the users, its much-needed revenue derived does not reflect the magnitude of the number of users. The reason is so that a majority of the users do not engage in the much-needed revenue sources. The increase in popularity of the social media seems to be more beneficial for purposes of social growth as opposed to the potential increase regarding income and the earnings in the short run.

The study shows that growth in the popularity of Facebook will have a positive impact in the future especially so in the developing countries. This fact can be attributed to the fact that the gradual rise of markets will, in the long run, lead to increase in revenue generating incomes. A good example is a country like India. India currently is observed to be developing regarding economic grounds. The reason for this is because as more job opportunities are being developed gradually due to the increase of those individuals seeking employment opportunities. Many countries like India currently seem to be generating fewer earnings and revenue but will have a significant growth increase in the future when its disposable income corresponds to its user base after it matures.

Due to its rapid growth in popularity, Facebook seems to be rising in its growth. Facebook seemingly reported 1.7 billion active users by the end of the year 2016. In turn, its revenue managed to increase up to 84% of its ad revenue. A major factor that contributed to this tremendous growth was mobile access towards Facebook. Through using mobile as a pathway to access Facebook helped increase its popularity.  Mobile access growth, however, does not represent the most metric path to follow.

It can be concluded that the only meaningful real Facebook metric that ought to be watched is without no doubt the Average Revenue per User or ARPU. Arpu is far more crucial aspect regarding growth in the long run as opposed to the growth of its user base.

A closer look into the ARPU shows that in mid-2014, the ARPU was measured to be around $ 2.24 globally. Nevertheless, in a country such as the U.S, the ARPU was observed to be $6.44 at relatively the same time. In addition to that, 1Q16 ARPU in the U.S was reported to be $12.43 followed closely by Asia which reported an ARPU estimate of about $1.56. 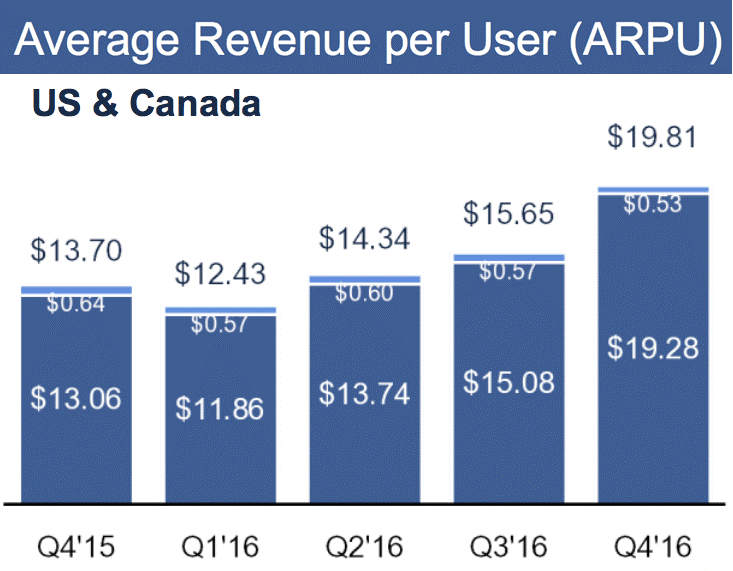 Consequently, in the last quarter of the year 2016, ARPU of the countries U.S and Canada was observed to be $19.81 which was an increase from the previous year 2015 of $13.70 during the final quarter.