Alphabet Company seems to be undergoing major crisis following the decrease in value of the shares from an estimate of $ 870 which is in class A to around $ 835. This may reflect the loss of value due to the loss the company is undergoing due to the ad crisis while at the same time providing an excellent opportunity for the shareholders to increase their number of shares at hand. 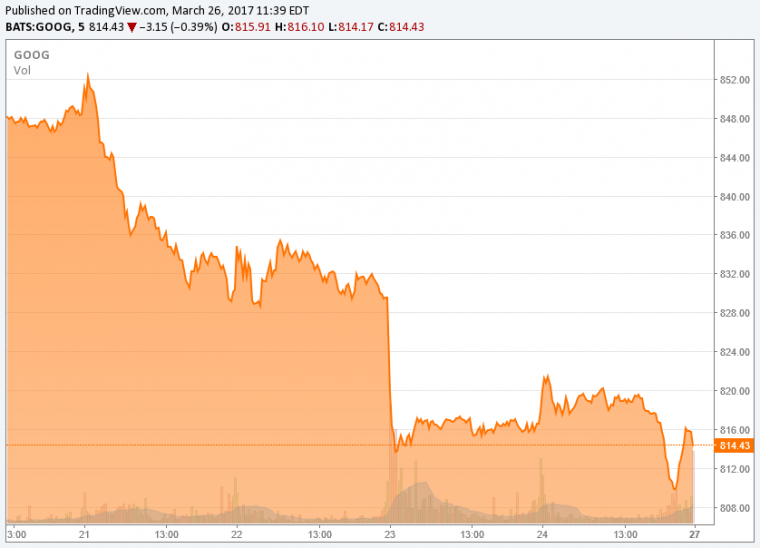 Despite these challenges, Alphabet is more than likely to overcome the shortcomings and increase the value of the stock. Added advantages to Alphabet Company are its strongholds of Alphabet which are Google search engine, Chrome browser together with Android mobile OS. Alphabet invests largely in online marketing industry. It has invested in shares of about 41% in GOOGL’s 2016 online ad revenues of $79.38bln accompanied with eMarketer’s gross total market estimate of 195bln.  Due to this, Alphabet has a better position of success as opposed to its competitors. This is because it has a wide coverage on the online ad market. Despite facing its major competitor-Facebook, it is crucial to keep in mind that Alphabet has gained a great market share and also 19% 5-year CAGR from a higher revenue base setting a difficult task for its competitors to beat. Apart from that, Alphabet reportedly disclosed its profitability margin to be 32% 5-year aggregated operating margin.

Despite the ad crisis that caused a decline in the shares due to the loss of some major clients together with their ad dollars, Alphabet has higher chances of increasing the shares value making it the most preferred company to engage in stock dealings. Its major strongholds such as Google search engine a very popular site provide the optimum preferred platform to boost its revenue from its pay-per-click content. In addition to that, Chrome has also been observed to be a very popular site. According to W3Counter, Chrome has earned itself a 57.2% share of monthly users as of the period of February 2017. Furthermore, it was discovered that it was the one that was constantly growing. Its closest competitor being Safari has reported its shares to be 13.2%. This has thus given Alphabet the unique opportunity to study and examine both the past, the present and estimate the future matters to do with the ad content to the consumers with relatively high “click” possibilities to help generate revenues and attract more advertisers in the long run. According to a study carried out by IDC, it showed that Android, one of Alphabet’s strongholds has earned itself the world’s most popular mobile OS earning itself a remarkable share of approximately 85%. Through Android, Alphabet can easily acquire adequate information on the behavioral preferences and changes on people’s preferences and choices and thus can easily correspond and remodel the ad content appropriately.

Alphabet undoubtedly has achieved major benefits that are derived from its major strongholds. Additionally, Alphabet also derives its revenue from other sources such as licensing fees, hardware and app and in-app purchases